The first edition of the CMB-S4 (Cosmic Microwave Background “Stage-4”) science book has appeared on the arXiv this year, detailing how the next generation CMB experiment will be designed to use the oldest detectable light in our universe to investigate some of the biggest open questions in physics today.

The ground-based, multiple telescope CMB-S4 experiment will begin starting in ~2020, and should be a factor of 10 more sensitive than existing CMB experiments. CMB-S4 is “intended to be the definitive ground-based CMB project,” putting on order 500,000 detectors on the sky at multiple frequencies over many telescopes and sites on earth in order to map a large area of the sky. CMB-S4 is a U.S. led collaboration of the CMB science community working on CMB experiments today, and international partnerships will be included.

CMB-S4 will be used to work towards science targets like tests of inflation, determining the number and masses of neutrinos, constraining possible new light relic particles, providing precise constraints on dark energy, and testing general relativity on the largest scales. CMB-S4 aims to be a part of the plan put forth by the Particle Physics Project Prioritization Panel (P5) report, which recommends supporting “… CMB experiments as part of the core particle physics program. The multidisciplinary nature of the science warrants continued multiagency support.” It will be valuable to combine the results from CMB-S4 with those from different experimental platforms in order to make progress in various areas of particle physics.

In a series of posts here, I’ll give an overview of what the CMB-S4 experiment can contribute to open questions in particle physics in three areas: neutrinos, light relics, and dark matter. Today we’ll focus on neutrinos.

Neutrinos are a hot topic in particle physics today, being one of the least explored areas in the Standard Model. We know about neutrino oscillations and masses, and know to some extent the mixing parameters involved. However, we don’t yet understand the scale of the neutrino masses and all of the mixing parameters. Furthermore, we don’t know for sure whether there are only three neutrinos or if there could be more. 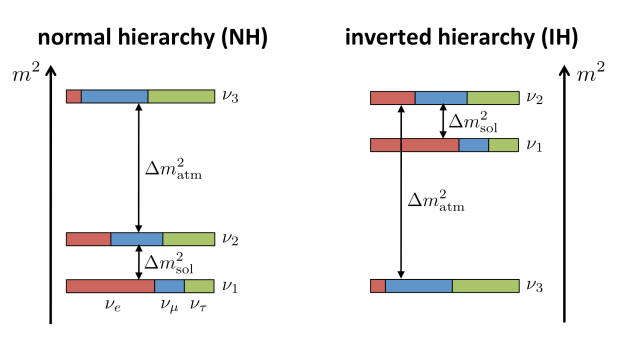 Cosmology opens a unique window on neutrinos, which were produced in large numbers in the high temperatures of the early universe and therefore left a lasting imprint on the CMB and large-scale structure of the universe. Although direct interactions between neutrinos and observable matter stopped about one second after the big bang, the gravitational effect of the neutrinos is still detectable at the time of recombination, as well as in the growth of structure in the universe at later times. By looking at these imprints in the temperature and polarization spectra of the CMB (see my post on the kSZ effect, for example), and in CMB gravitational lensing, which directly measures the matter distribution along the line of sight, cosmologists can glean information about the neutrinos in our universe.

Numerical simulations of the density distribution in the universe with (left) and without (right) massive neutrinos. Image credit: Shankar Agarwal and Hume Feldman, University of Kansas.

The sum of the neutrino masses can be probed using the CMB, and CMB-S4 will measure this sum with high significance (~3σ). The current lower limit on the sum of neutrino masses from solar and atmospheric oscillation experiments is 58 meV — if the upper limit is determined to be less than 105 meV, the inverted neutrino mass hierarchy would be disfavored, suggesting that the third neutrino mass state would be the heaviest. Once the sum of neutrino masses is determined it will inform the prospects for future neutrinoless double beta decay experiments which investigate whether or not neutrinos are their own antiparticles (also known as Majorana particles). You can read more about the open question of whether neutrinos are Majorana or Dirac particles here. Neutrinoless double beta decay rates depend on the neutrino mass hierarchy in that an inverted mass hierarchy would make it much easier for the decay to be observed than in the normal hierarchy case (which might make the effective Majorana mass unobservably small).

Finally, CMB-S4 is particularly sensitive to the existence of theoretical additional neutrinos that interact more weakly than those in the standard model – so called “sterile neutrinos.” The existence of sterile neutrinos might resolve some anomalies in existing short baseline experiment data but there has yet been no definitive evidence for their existence, and the current data is in tension with cosmology. Due to the relatively large mixing angles sterile neutrinos would have, they would have affected primordial nucleosynthesis (the earliest production of nuclei in our universe other than those of hydrogren-1) and CMB measurements of Neff, the total radiation energy density at recombination. That’s a mouthful! Let’s back up (way up, to the beginning of the universe…) for a moment:

During the first few minutes after the big bang, the universe evolved through certain conditions of temperature and density that allowed the first synthesis of light elements to begin. This is usually referred to as “big bang nucleosynthesis” or “primordial nucleosynthesis,” and took place in the first seconds to minutes after the big bang. Primordial nucleosynthesis is responsible for the formation of most of the universe’s deuterium, helium, and a small amount of lithium. The abundance of these first light elements, and the details of the CMB cosmologists observe today, are sensitive to the total radiation density that was present in the early universe. This radiation density is usually parametrized through a quantity Neff, which is ~3.046 for standard model physics. In standard models of particle physics and cosmology, the value of Neff measures the total energy density of cosmic neutrinos. In more general models, Neff receives contributions from all forms of relativistic particles other than photons present in the early universe. If the measured value of Neff is found to be larger than the Standard Model prediction, it would be an indication that there is additional radiation in the early Universe or that the thermal history must be modified. This means that Neff can be used as a sensitive probe of physics beyond the standard model. CMB-S4 will improve our constraints on Neff, opening a new regime in the cosmological search for new physics. Conservative estimates of CMB-S4 reach σ(Neff) ∼ 0.02 − 0.03, which will test the minimal contribution of any light relic with spin at 2σ and for any particle with zero spin at 1σ. This will be important in the discussion of light relics in a later post as well.

Today, CMB constraints from Neff are in excellent agreement with the Standard Model expectation of three species of neutrinos and antineutrinos. Currently the best constraint on Neff comes from measurements from the Planck satellite, giving Neff = 3.04±0.18. If sterile neutrinos beyond the three known neutrinos exist, a correlated signature in both a excess in the sum of the neutrino masses and ∆Neff due to the presence of thermalized sterile neutrinos in addition to the active neutrinos in the early universe would be detected. The sterile neutrino parameters would be detected at high significance with CMB-S4 if these models do indeed describe our universe.

It is possible that the neutrino sector is rich in new physics waiting to be discovered and understood, and a CMB-S4 experiment will provide us with new opportunities to do just that.